Typology of Regions and meso organisations 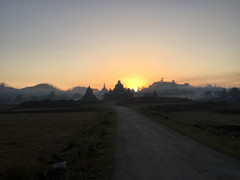 The concept of the Typology of Regions was originally introduced in the Mesopartner Working Paper 10 which focuses on options and choices for designing a Regional Development Agency (RDA). The intention was straightforward: regions are different, and thus meso organisations such as RDAs need to be different as well. They need to be adjusted and contextualised to local realities. Hence, for each type of regional or local development reality, different types of meso organisations need to be in place or should have a different focus and mandate.

The Typology of Regions describes four archetypes of local/regional development realities in a two-by-two matrix structure. The matrix distinguishes between the level of institutionalisation and infrastructure endowments on the y-axis, and the wellbeing of main economic sectors and their economic growth trajectory on the x-axis. It is based on the assumption that institutional and infrastructure factors are essential for economic development and that they advance and take shape in parallel with economic growth and based on the specific demands of the key economic sectors. Taking this assumption into account, four different archetypes of development realities can be sketched as in Figure 1 below. 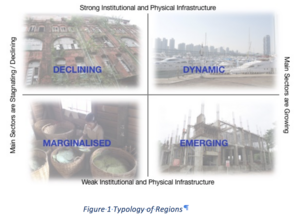 There is a crucial difference between the development approaches required in scenarios one and two compared to scenarios three and four. On the right side of the matrix in Figure 1, meso-level organisations should focus on smoothing the economic growth process through better communication and coordination or very targeted support that is not offered at the micro level, e.g. incubation of start-ups. On the left side of the matrix, however, major sectors are in stagnation or even declining, which calls for a turn-around approach or the development of new themes. Here a strong change facilitation approach is needed that helps to generate innovative ideas on how to use existing resources and assets for new economic activities and for creating a new vision.

In both approaches the typical activities of meso level organisations (undertaken by one large RDA or a network of specialised institutions) would take a different shape. These activities target all sorts and sizes of enterprises, including micro-entrepreneurs and farmers, and could comprise incentive creation, skills development, infrastructure maintenance and development, real estate development, SME promotion, start-up promotion, technology extension, business networking and others.

In a dynamic situation, existing meso organisations would have constant exchange with enterprises of leading sectors or their associations. They would be listening to their demands for upgrading infrastructure, developing real estate, promoting trade, doing locational marketing, etc. Enterprises would possibly ask for the setting up of more organisations or more specialised organisations, such as vocational training centres or a technology incubator.

In an emerging situation, the meso level is still thinly populated with organisations. The few operational organisations will have started communicating with the growing industry and will try to satisfy their needs, if reasonable and feasible. This could include setting up more basic infrastructure, developing industrial zones, creating incentives for more enterprises to start up or relocate to the location, e.g. through tax holidays or reduced land prices. The call for a wider scope of professional meso-level activities would be particularly loud, such as helping with skills development in industry, mentoring and coaching of start-ups or organising trade fairs.

In a declining situation, the still strong organisations would need to find a new mission and – in communication with existing and would-be entrepreneurs – identify new economic activities that could develop into future lead sectors. Creating incentives for trying new business ventures and soliciting innovative business ideas would be a particular focus of such organisations. Business plan competitions, future workshops and scenario exercise would be typical events, but also learning from other places that had gone through similar structural change processes. Re-education of the work force would be a necessary part of the structural change, e.g. from heavy industry to tourism, and would need support by the meso level.

In a marginalised situation, the required support activities from the meso level are similar to the declining scenario, but the meso institution(s) that could take the lead in a change facilitation process are mostly not available and do not have the capacity for such a demanding task. For economic growth to take place in such a situation, either a few local or externally investing entrepreneurs with an innovative business idea would initiate the process, or higher-level organisations (national or supranational) would step in to try to kick-start a process of economic growth and parallel local institution building. The digitalisation that will arise strongly in the near future will facilitate the process of making marginalised locations dynamic, as it is expected that external organisations will move much closer to their local target groups and customers, decouple the place of work from the place of employment in many sectors, reduce out-migration and create more equal living conditions between more and less developed places.

In conclusion, we have used the Typology of Regions concept to help development agencies to figure out what the dominant mindset in specific archetypical regions may be. We have learned that in almost any geographic space one will find variations of the typology. For instance, a booming commercial hub could also have emerging, marginalised and declining sub-areas. We believe that while the principles of economic development are usually the same, the priorities in these different archetypes may be different. In some the focus is on working with current trends while improving on inclusion, and in others it is about trying to create new momentum to explore better alternatives.

This is article 2 of our Mesopartner Annual Reflection 2018